The Monday following a long 4th of July weekend celebrating the independence of the United States of America, the Trump administration again shocked the American public by announcing that foreign students in the United States on F-1 or M-1 nonimmigrant visas whose course loads are carried out exclusively online amid the coronavirus pandemic will have to leave the country.  Panic, panic, panic.

This is not fake news.  It is as real as it gets.  Immigration and Customs Enforcement (“ICE”) announced that international students pursing degrees in the United States will have to leave the country or risk deportation if their universities switch to online-only courses due to COVID-19.

Universities around the country are beginning to make the decision to transition to online courses as a result of the coronavirus pandemic.  At Harvard University, for example, all course instruction will be delivered online during the fall semester, including for students living on campus.  Many other of the Nation’s most prestigious institutions of higher learning are making similar decision.

In a news release Monday, July 6, ICE said that students who fall under certain visas, such as F-1 or M-1 nonimmigrant visas, “may not take a full online course load and remain in the United States,” adding, “the U.S. Department of State will not issue visas to students enrolled in schools and/or programs that are fully online for the fall semester nor will U.S. Customs and Border Protection permit these students to enter the United States.”

ICE suggested that students currently enrolled in the United States consider other measures, like transferring to schools with in-person instruction.  Easier said than done.  And for those students already enrolled in the colleges and universities or their choice, suggesting that they move to a different school that may not have the prestige, programs, or resources of their current institution because of changes dictated by the Coronavirus pandemic is not only shortsighted, but also punitive. 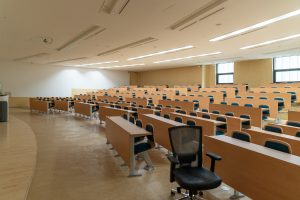 There’s also an exception for universities using a hybrid model, such as a mix of online and in-person classes.  Though it remains to be seen how many colleges and universities have even contemplated such a model for student instruction.

It was only a matter of time until the Trump administration was hauled into court for announcing such a draconian measure.  In less than 48 hours, Harvard and MIT (Massachusetts Institute of Technology) sued the Trump administration over its guidance of not allowing foreign students to take online-only courses in the United States this fall semester.  In a statement to news outlets, Harvard said the guidance stands to affect approximately 5,000 international students.

According to Harvard President Larry Bacow, “The order came down without notice—its cruelty surpassed only by its recklessness.”  He went on to note that the guidance seems “designed purposefully to place pressure on colleges and universities to open their on-campus classroom,” a current politically charged battle line of the Trump Administration.  This point of view is buttressed by the fact that “ICE is unable to offer the most basic answers about how its policy will be interpreted or implemented,” per MIT President L. Rafael Reif.

The lawsuit underscores many of the challenges posed to international students.  Being weeks away from the start of the fall semester, these students are largely unable to transfer to universities providing on-campus instruction; moreover, for many students, returning to their home countries to participate in online instruction is not a viable option.

With more than 1 million international students and nearly 3 million diagnosed COVID-19 cases in the United States, what would happen if the public health situation deteriorates in the fall and universities that had been offering in-person classes feel they have to shift all courses online to stay safe?  What would happen if travel were restricted and these students had no way to leave the United States?

The likely outcome of this crisis created by the Trump administration is that a federal judge will restrict the new guidance from going into effect by issuing a temporary injunction.  Another outcome is that schools might provide a hybrid program consisting of online and in-person classes, to appease the Trump administration, who is pushing for all schools in America to reopen next month in August.

The requirement of in-person classes is one created by regulation, which can be easily remedied by President Trump through executive order or Congress through its power to legislate.  Will President Trump do the right thing and put public health interests first?  Will Congress take action or sit by idly as it has so many times in the past?  We will see in short order how this situation plays out.

What can you do?  Write to the White House.  Call your Congressperson.  Make your voice heard; it’s how our democracy is supposed to work.

If you have questions about your particular student visa situation, please reach out to us at once to schedule a consultation: 713.955.2065.